In Season 1, Episode 13 “The Bat Jar Conjecture” which airs tonight on the Big Bang Theory rewatch (aka it’s on five nights a week now check your local listings at www.bigbangweeknights.com), Sheldon is at odds with the rest of the gang over the psychics quiz bowl. In one of my favorite episodes of the season Leonard, Raj, Howard have enough of Sheldon’s superiority complex and decide to form a team against his own. The friends are divided and, as always, hilarity ensues.

I don’t know many friends who haven’t (at least once) competed. One of my favorite stories of competing comes from a time when the BtL folks were all playing games in my apartment. In one particularly harrowing card game Kim “was mean” to Emma, Emma’s response was devastating. The competition was hilarious. Within a couple rounds Kim’s cards were decemated and I don’t think Emma even won the game, but she did destroy Kim’s chance to.

Thankfully, everything in my circle of friends can be won over with a good round of Karaoke and, much like the Batman cookie jar in this week’s episode, it soothed the friendship (but the incident is still infamous).

I have been hired by Warner Bros. WBWord division to promote The Big Bang Theory in Syndication.

It’s been fun to be able to rewatch The Big Bang Theory 5 nights a week. Rewatching “The Middle Earth Paradigm” from season 1 really reminded me of how well-developed the characters were from the first season. In the episode the boys get dressed for a costume party at Penny’s. Leonard goes as Frodo, Howard as Robin Hood (but he keeps getting mistaken for Peter Pan), Raj as Thor, and Sheldon as “the doppler effect.” Penny? She just goes as a cat.
It’s funny how revealing the costumes are. Leonard at this point of the show is on a never ending quest, only instead of a ring, he’s questing for Penny’s affection. Also, as a hobbit, he plays off his own height issues (especially later when confronting Penny’s ex-boyfriend who is way taller than him).

Sheldon’s famous quote about his costume is, “I don’t care if people get it, I’m going as the doppler effect.” True to his own character who most people don’t really get, but Sheldon doesn’t care.

Howard, who believes himself to be a suave, charming ladies man goes as Robin Hood, but much like real life he’s often mistaken for Peter Pan, the boy who won’t grow up. Especially since Howard still lives at home and has a disturbing relationship with his mother.

Raj, who is incapable of speaking around women, dresses as Thor, the loudest of the Norse gods. Which may be Raj’s aspirations, but comes far from the truth.

Since it’s nearly Halloween it really got me thinking about Halloween and what costume people choose. What do you think, what does your costume say about you?

I have been hired by Warner Bros. WBWord division to promote The Big Bang Theory in Syndication.

The Big Bang Theory is now in syndication and airing five nights a week! If you haven’t watched the series yet, you should jump on the TBBT bandwagon. If you have seen it before it’s a great excuse to rewatch from the beginning! Go to www.bigbangweeknights.com to check for your local listings.

In the pilot episode (aired 9/19) Leonard, geeky science nerd, meets Penny, beautiful wannabe actress, for the first time and is immediately infatuated with her. Because of his infatuation he agrees to go and get her TV from her ex-boyfriend, despite the warnings from his friends that it’s a very dumb idea. The confrontation with the ex-boyfriend doesn’t go well, but instead of using his intelligence Leonard decides to try again and winds up being de-pants.

While the events of the pilot are very sitcom the reason I believe The Big Bang Theory works is it shows a very human response to life’s problems. Leonard, like most people, falls victim to doing stupid things when because he’s in love. It’s not the last time he’ll do something so crazy because of his infatuation. It’s something everyone can relate to, especially if you’re a geeky nerd like Leonard. It’s what makes his character likable.

In the end, you may not have lost your pants because of love (okay I’m  not talking the sexy way…) or had to confront a well-muscled jerk, but I’m I’m sure you’ve done something just as crazy. As Willow said on Buffy, “love makes you do the wacky.”

So what’s the craziest thing you’ve ever done for love?

Want to see more crazy moments on the Big Bang Theory? Tune in 5 nights a week!

WARNING SPOILERS FOR SEASON 4 of The Big Bang Theory.

In Season 4 of The Big Bang Theory Penny, the lone female lead in a cast of four males, finally got some girl friends. Now, I love The Bang Theory, but these two new girls (Bernadette and Amy) added some much needed balance to the cast (and some female nerds, which was awesome).

There’s something refreshing about the larger cast, mainly because it adds more maturity to the show (in a way) because Penny, Bernadette, and Amy can discuss relationships, work, friendship in a way that the male characters can’t. Of course, the relationship was necessary because of Leonard’s new relationship with Raj’s sister (Priya) caused Penny not to hang out in Sheldon and Leonard’s apartment. Poor lonely Penny needed friends of her own (and more excuses to film in Penny’s apartment) and she got them.

Deep friendships with the opposite gender are explored a lot on The Big Bang Theory and I’m happy that the girls and boys have their own time to discuss things together that may be awkward or impossible to discuss with a mix gender group. Plus, it’s led to some great situational humor as Amy tries to have the female friendships she should have had growing up.

Relive all of the fun girl friend moments with The Big Bang Theory Season 4 on DVD/Blu-Ray.

Among my online friends there’s been a lot of talk lately about roommates. Specifically about the pain of living with roommates. Having to share a room with my sister did not adequately prepare me for the nightmare that was sharing a room in college. I had 6 different roommates in my years in college and most of them were, in some way or another, difficult. Then I lived in a three bedroom apartment with two other girls and that, also, was a bit of a nightmare. Lets just say that Passive Aggressive notes took a whole new level of amazing when I lived in that apartment. Of course, if we would have had a roommate agreement like Leonard and Sheldon some of that difficulty may have been avoided. At least we would have known where we stood.

My favorite roommate though was my junior year of college when I met Hannah. She was a fantastic roommate and we got along so well despite our obvious differences. We were both very busy, she was planning her wedding and trying to finish her senior year and I was a junior involved in every activity imaginable and my first boyfriend. Every night we’d come back to our rooms exhausted and crawl into bed and turn off the lights, but stay up for hours talking. She was a source of encouragement and wisdom, especially when my life seemed a hectic frenzy. I can’t say that I had changed any when I lived with Hannah, all of my faults were there (even more so because I was so stressed and busy), but Hannah was so radically different than any other roommate relationship I ever had.

Lately my pastor has been talking about what real love is and how real love overlooks flaws and just loves. I think that’s what I was missing in a lot of my roommate situations before and after that experience – love. Hannah really showed me what friendship and love were about.

When it comes to The Big Bang Theory as much as the other characters on the show and Leonard make fun of Sheldon and often get very annoyed with him – I think there’s a deeper friendship/love that they have for each other. It’s what keeps viewers like myself coming back to the show (okay, that and the geeky references and situations). But honestly, their friendship is one of the vital parts of the show. It might not always work, but Sheldon and Leonard have a friendship that most people would envy, a friendship that I had with Hannah. Hopefully (as far as fictional characters can) they appreciate it!

Catch up on The Big Bang Theory and Sheldon and Leonard’s roommate-ness buy buying Season 4 on DVD and Blu-Ray: http://bit.ly/nAnZ5T 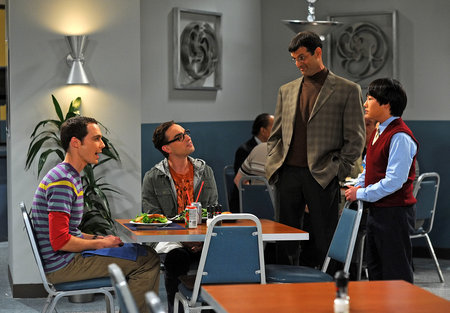 This past season of the Big Bang Theory we saw a lot more of the boys at work at CalTech. Their office life is something that I envy! Imagine being surrounded by cool lasers and a cafeteria that lets you take as many napkins as you want. My last office job was full of geeks much like CalTech, but it seemed to have a higher ratio of females than CalTech.

One of the things I love about the Big Bang Theory is a lot of the relationships between the characters are centered around hanging out and eating. It’s no different at their work where a lot of pivotal discussions and introduction of new character/plots happen in the cafeteria. A lot of my co-worker bonding time has been around food as well (shared lunches, free lunch Friday, etc). There’s something universal about sharing a meal together.

Of course, I’ve never spent overnight sleeping at my office like Sheldon did when he refused to learn how to drive. But in a lot of other ways my office experiences were similar to the ones you see on The Big Bang Theory… except for the laser part.

How about you? Do you and your co-workers bond over lunch? Do you get to work with lasers (okay, I’m super jealous of the laser bit, I admit)?

If you haven’t yet watched The Big Bang Theory, I suggest you do. Especially if you’re a geek (or if you want to understand the geek in your life better). The half hour comedy follows the dynamic duo Leonard (played by Johnny Galecki) and Sheldon (Jim Parsons) [along with their best friends Howard and Raj] as they go through lessons on life and love with the help of their “normal” neighbor Penny (played by Kaley Cuoco).

Season 4 was a wild ride for the boys and best friends as some of the characters start serious relationships. I like the introduction of two more female regulars in this season to give a much needed balance to the main cast. It’s surprisingly refreshing to see geeks appear to be able to have real, honest relationships both with friends and with significant others. In many ways the “geeks” of the show (Leonard especially) are show to actually make better boyfriends than the array of “normal” guys.

If you’re new to the Big Bang Theory or need a refresher before the show starts back up this fall check out the DVDs and make sure not to fall for any classic practical jokes on the way to your shopping cart.

Order your copy of The Big Bang Theory on DVD or Blu-Ray now: http://bit.ly/nAnZ5T